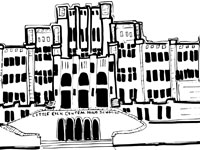 This memoir tells the story of Melba Pattillo–a brave, resilient, and justice-minded high school junior who chooses to join the historic Little Rock Nine as they racially integrate Central High School in 1957. We chose this book for its powerful exploration of important social and emotional themes: courage, racism, social justice, non-violence, sacrifice, and empathy. This curriculum will inspire students to build connections between Melba’s life in the Jim Crow south and their own experiences as contemporary Americans.

This is an autobiographical account of Melba Pattillo, one of the Little Rock Nine — the first African-American students to integrate Central High, an all white school in Arkansas. Melba begins her account in late elementary school, around the time of the Brown v. Board of Education Supreme Court ruling that declares segregation in schools to be illegal. Melba secretly signs up as one of the students interested in being a part of the small group to integrate Little Rock Central High. Melba and the eight other students selected to integrate Central High are constantly met with opposition, in spite of support from the Supreme Court and the President of the United States. Melba narrates the violence, political games, tormenting, and isolation she and the Little Rock Nine endure and resist. Following a year full of struggle, unlikely friendships, and tremendous growth, Melba and her friends part ways to further pursue their educations. This curriculum will inspire students to build connections between Melba’s life in the Jim Crow South and their own experiences as contemporary Americans.