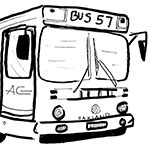 This book explores the true-life story of two teens growing up in the same city, but in completely different worlds: Sasha is a white, agender teen from a middle class family who attends a small private school, while Richard is a black, male teenager from a low-income family who attends a large public one. It takes just a moment of overlap for both of their lives to change forever: Sasha is left severely burned, and Richard faces two hate crime charges. We chose this book for its careful exploration of timely social and emotional themes: segregation, gender, justice, forgiveness, community, and empathy. This curriculum will inspire students to build connections between this national news story and their own lives, unpacking the complex ways that race, class, and gender shape our identities and experiences.

The 57 Bus is a book of creative nonfiction, exploring a 2013 incident between two Oakland teens that swept national news headlines: while riding the 57 bus, Sasha Fleischman was set on fire by Richard Thomas. The book traces the stories and perspectives of both teenagers, and the very different worlds they inhabit. Sasha is a white, middle-class teenager who identifies as agender (neither male nor female) and attends a private high school; Richard is a low-income, African-American teen who attends a large public high school struggling to meet the needs of its students. Their lives have very little overlap, until Richard sees Sasha sleeping on the bus, wearing a skirt, and impulsively lights the skirt on fire. The author, Dashka Slater, pieced together the details of the incident for this book from a variety of sources, including interviews, documents, letters, videos, social media, and public records. The book explores the lives of the two teens, the events that led to that day on the bus, and the aftermath of the encounter, exploring questions of justice, healing, and empathy.