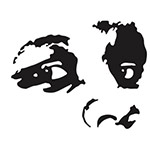 Meet Jerome, a 12-year-old Black boy who has just been killed by a White police officer, and bear witness to his powerful journey to understand his life and death. Follow along as Jerome meets and learns from the ghosts of other boys, like Emmett Till, who have lost their lives to racial violence, and explore his unlikely friendship with the only living person who can see him: the 12-year-old White daughter of the police officer. We chose this novel for its thoughtful attention to some timely social and emotional themes: systemic racism, telling one’s story, police brutality, bullying, empathy, and understanding. Students will find themselves relating to and being inspired by Jerome’s journey to understand social injustice; this curriculum will help students build connections between Jerome’s story and the injustices they’ve witnessed in their own lives.

Ghost Boys explores the story of 12-year-old Jerome, who is growing up in a poor neighborhood in Chicago. The story opens with Jerome’s murder and shifts back and forth between the periods before and after his death to illuminate his story. In the before, Jerome accepts a toy gun from his new friend Carlos. When a police officer sees Jerome playing with the toy in an empty lot, he immediately shoots the boy. In the after, Jerome moves around Chicago as a ghost and meets other ghost boys, like Emmett Till and Trayvon Martin, who have lost their lives to racial violence. Ghost Boys makes connections to Emmett Till’s life and death in order to highlight how systemic racism and state-sanctioned violence has persisted across time and history; the author uses Jerome’s contemporary story to explore other relatable themes, like bullying, friendship, and family. As Jerome comes to terms with the reality of his death and the unjust circumstances that led up to it, he experiences some powerful revelations. Jerome calls on the living, like the police officer’s young daughter, to see the impacts of racism and change the world, so stories like his do not keep happening.